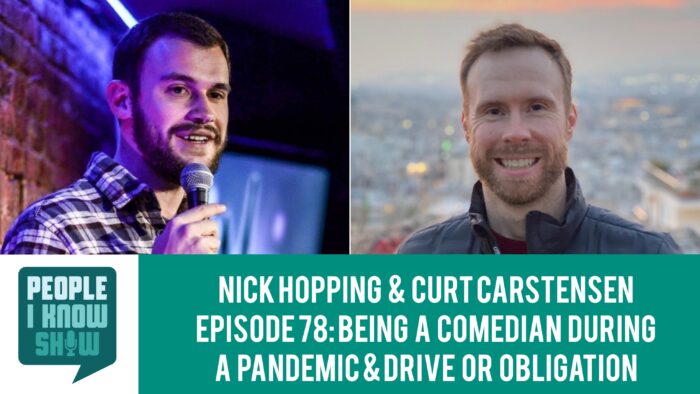 It’s a rarity for me to have a guest on my “People I Know Show” podcast that I have not met in person. Nick Hopping was only the third person that I’ve talked with in that circumstance. During the pandemic, I’ve gotten some daily laughs because of him and observed a high level of determination.

Besides watching on YouTube, you can listen from your favorite podcast app. Click the icons below for some popular choices or go here for additional options: http://bit.ly/pikslisten.

Read the transcript of this episode.

Standing Out without Stand Up

Comedian Nick Hopping went from being an unknown to me to being someone I’ve come to rely on for daily entertainment. I started to follow him on Instagram around the time the coronavirus pandemic began. He’s a stand up comedian that suddenly was without open comedy clubs to make his nightly appearances. He transformed his Instagram account. When Nick says at the beginning of his videos that he was “learning something new every day of the pandemic” he was serious. He was committed to creating a video each day and had for more than 60 days when he was a guest on my podcast.

When I recently had the thought that I’m not always as driven to do the things I plan to do as I am obligated, I began to wonder. Why do we as humans do that? Why do we commit our future selves to do something that maybe our future self won’t feel like doing? We might make this commitment with ourselves or with someone else, or the obligation falls within some pressure of family, culture or society and not with any particular individual.

At least this is the way I have been considering it. But I don’t know that others look at their life this way. I did notice that Nick had been uploading his videos later and later most days. Through the lens of drive and obligation, it appeared that Nick had only continued to make these videos because he felt obligated to do so. I was curious on his perspective, which was a bit different than mine.

Because he is driven towards his overall objective of becoming a better and better comedian, he still believes he’s driven in those moments he experiences some laziness or obligation. And maybe this is a better way to look at it. Maybe breaking down each action individually too easily ignores the greater purpose. It’s an interesting concept. Please comment below with your perspective.

Nick is clearly driven. When he talks about how obsessed he is with his comedy career its clear. If he is not careful it can detract from other aspects of his life.

I found it interesting to learn that Nick is not a sports fan and really know nothing about sports. I am a lifelong sports fan but I have felt my fandom declining in recent years. To me, there is something about sports that is not talked about by many others. People that don’t get sports or don’t get into sports might have never been exposed in the right way. There is something about being in a packed stadium or arena with thousands or tens of thousands of people and being amidst the serious and passionate energy of the crowd. I related it to why I believe a comedian is even funnier in person with a crowd of other comedy fans.