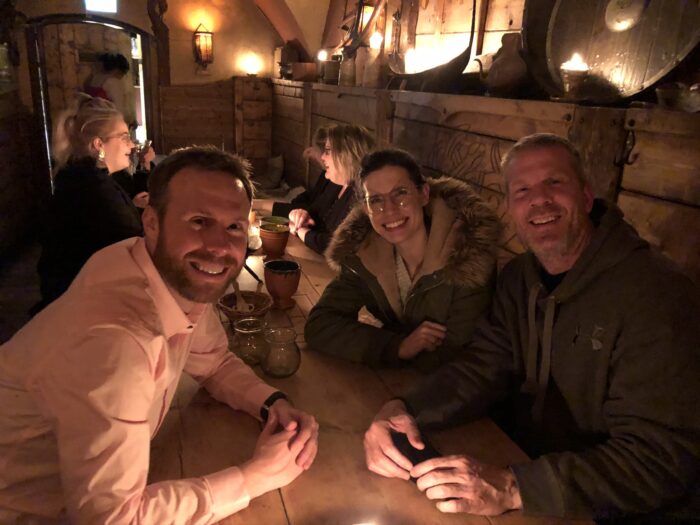 Meagan joined me for a conversation about her time on Sweden’s version of “The Bachelor” and several other fun topics including her winning performance on “The Price Is Right”. Plus, we added an update on what she was experiencing in Sweden in the time of the coronavirus, about one month after seeing her in person.

It was so cool to reconnect with Meagan Nouis, a former colleague of mine, during my time in Sweden. This post is more about my time in Sweden than the podcast, but if not for Meagan living and studying Sweden, I would not have visited there.

My friend Brad and I made Stockholm our final stop on our two-week European adventure. We arrived to Stockholm from Denmark on a Thursday evening. We had two dinners, yes, two dinners, and walked some of the main streets of the city. Temperatures were hovering around 0 degrees Celsius.

The next day we participated in two walking tours. One in the new town. And one in the old town.

These were great tours! No matter what city you are in, taking a tour is a good way to see the area and hear some cool stories and learn some interesting facts.

Between the tours we had a surprisingly low cost and delicious sushi buffet. Meals can be expensive in Sweden so we felt fortunate to stumble across something more affordable. It seemed that there might be plenty of lunch time deals available.

Later in the day we visited the Vasa Museum, home of a 17th century warship that sank on its maiden voyage. In recent decades it has been recovered and restored. The Vasa is one of the most popular museums in Sweden.

Later that night we joined a pub crawl with other guests staying at our hostel. We stopped at four pubs/clubs in the city, made some friends, and had a great time.

On Saturday, February 29th, our final full day of vacation, Meagan took a train into the city to join Brad and I for the day. She showed us some of the best views of the city and found a hidden gem, a graffiti park.

Later in the day we had a “fika” which is a Swedish coffee break that focuses on sharing a coffee or tea and a snack while making time to be with friends. It’s an important aspect of the culture that I believe should be adopted in the United States.

Meagan and I then recorded the podcast episode, where she shares stories from her time in Sweden, her appearance on Sweden’s version of the popular reality TV show, “The Bachelor”, and her winning performance on “The Price is Right”, among other fun topics.

Later in the evening we explored more of Stockholm only to discover there are many underground bars. We visited one with a Viking theme while another had an Irish band performing live. They were all built into old cellars that didn’t seem to have the idea of a modern bar layout some centuries ago, which ago added to the appeal.